Here on the Mountain, we’ve been locked in what seems like the unbreakable grip of an historic heat wave. The northbound jet stream has pinned a high-pressure system over the southeast for weeks. Even at our altitude, the days are windless and still; the night’s insects are quieted; deer feed on yellowed shrubs; grass crunches beneath the feet like gravel. “Global weirding” was what writer Thomas Friedman once dubbed climate change, and that’s exactly how it feels—all weather leveled, the seasons no longer pronounced, Indian summer unyielding to even October. There’s been no rain either, so the foliage isn’t vibrant, the desiccated leaves are shriveled on the branches, they disintegrate in the palm like ancient clay. It isn’t pretty. Nor is it to avoided or ignored. Best that it is beheld. Otherwise, change will never come. 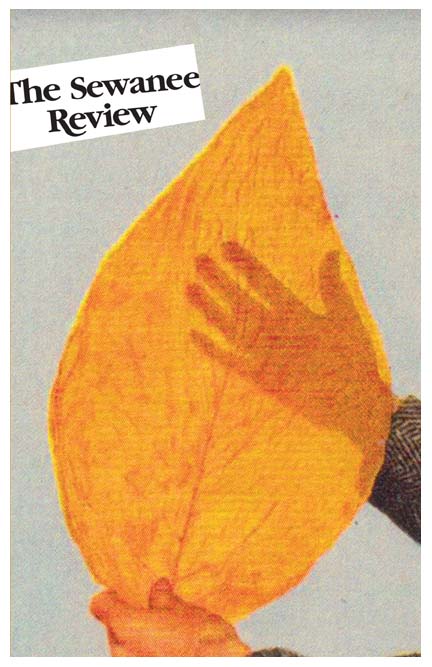 It’s the duty of art to be similarly unflinching. And so, in our Fall 2019 issue, which publishes online on October 7 and in print the following week, we feature fiction that refuses to look away from difficult truths. Lisa Taddeo’s “The Huntsman” tracks a young woman’s tragically beautiful descent into degradation. We’re graced by an excerpt from Garth Greenwell’s upcoming novel Cleanness—it’s his first appearance in the Review—that takes a clear-eyed look at homophobic violence and exposes the gulf between idealism and reality, protest and practice. In the spirit of Halloween, we have ghost stories by Steven Millhauser and Jowhor Ile. Both deal with loss and redemption and how keeping close company with death and darkness is integral to transformation—stories, I’ll add, that also mark these authors’ debut in our pages.

We also welcome to the Sewanee Review for the first time Anna Lena Phillips Bell, Douglas Kearney, Karen Solie, Kathleen Ossip, and Tyree Daye, as well as critic Christian Lorentzen, with a review of Ben Lerner’s The Topeka School, Molly Antopol with a memorial for her teacher John L’Heureux, and a craft essay by Leslie Jamison. Here, too, these writers stare down personal and national history and how both bear on the struggle with different forms of inertia and stasis. Daye’s poem “Miss Mary Mack Considers God” treats the effort to overcome the borders racism erects in the soul. “There are no fences, / because to run is to die, they must fly from here.” In her craft essay, “Archive Lush,” Jamison describes how she literally drafts and re-drafts herself into sobriety: “I started writing about sobriety not because mine seemed remarkable, but because it didn’t.” Christian Lorentzen, meanwhile, examines how Lerner’s new novel wrestles with the consequences of opposition to political and social change: “The Topeka School seeks out the roots of the Trump era in the novelist’s home state of Kansas and the portrait of a liberal family beset by the rising tide of reaction. Avatars of Trump-era politics stagger through the book, man-children in various states of innocence and menace.” Inertial forces indeed.

Speaking of change, of one season giving on to the next, this summer marks the final one of founding director Wyatt Prunty heading the Sewanee Writers’ Conference. In the thirty years since its inception, some of the most important writers in America have come to the Mountain every July to share their wisdom and work with attendees. As a tribute to Mr. Prunty, over twenty Conference faculty and participants contributed pieces to honor his tenure: writers such as Claire Messud, Robert Hass, Christine Schutt, Rebecca Makkai, and Tony Earley, among others. The tribute offers an intimate portrait of the Conference over the last three decades while revealing incalculable beneficent effects of gathering like-minded people together in one place. Our admiration for Mr. Prunty’s contribution to so many literary careers knows no bounds. We wish him well in the next phase of his career, and we also welcome incoming Director Leah Stewart, who introduces the tribute, to her new position. And until autumn actually arrives, we hope this issue of the Sewanee Review refreshes your mind, ignites your imagination, and cools your soul.

Suddenly Seeing in Absent Sandstone How It Will Be

Mostly time is slow about amputating
our lives from us. Our fifteen-year-old sits
at the table where she was four, debating
how many weeks in our hometown will fit
into her summer, and we let her win.

We (Cass’s former students, friends, past and present neighbors, and respected adversaries) had been invited to gather in Connecticut for the seventy-seventh birthday of Casswell Duncan Damaris by his wife, Charlene Andresson. (It’s important that a woman retain her maiden name, even if the concept of “the maiden” has been tainted by simple-minded people who’ve invented nonsense about the symbolism of unicorns and the plights of dashing knights).

I sewed on Paula’s pink dress. I fixed Paulina’s white dress.
I ripped up and ironed
Jane’s old black silk dress. If there is any such thing