The Sewanee Review is pleased to announce that Garrett Hongo is the recipient of the 2022 Aiken Taylor Award for Modern American Poetry. 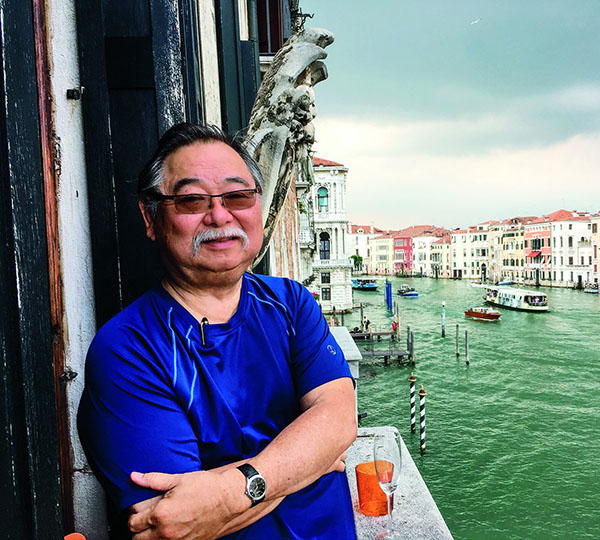 In Garrett Hongo’s work there is often the numinous clarity that attends the greatest elegies. Such clarity springs not just from an abundance of human feeling but, as is the case in so many of Hongo’s poems, a seeker’s hope: that language, if it cannot save us, can at least act as a salve. That if we cannot unmake our pain, we can construct a vessel that makes it bearable. In his work—which draws regularly on his life as a fourth-generation Japanese American, as well as the experiences of his ancestors in California and Hawai‘i—we see a poet who at once fashions the language and is fashioned by it, accessing in himself what the poems allow us to access when we read them, which is the ever-present song of true grief, which is also a song of love, and of longing, and of the possible.

Garrett Hongo is the author of three collections of poetry, including Yellow Light, The River of Heaven, which received the Lamont Poetry Prize and was a finalist for the Pulitzer Prize, and Coral Road: Poems. Hongo is also the author of Volcano: a Memoir of Hawai‘i, The Mirror Diary, and his most recent book is The Perfect Sound: A Memoir in Stereo.

University Vice Chancellor Dr. Nancy J. Berner and Sewanee Review editor Adam Ross will present Hongo with the Aiken Taylor Award this fall at the University of the South in Sewanee, Tennessee. As part of this year’s award celebration, poet and critic Christopher Spaide will lecture on Hongo’s poetry. Spaide, a Junior Fellow at the Harvard Society of Fellows, has written widely on music, comics, and poetry, and his work appears in the Boston Globe, The Wallace Stevens Journal, Contemporary Literature, Ploughshares, Poetry, and the Sewanee Review. He was recently named a 2022-2023 Fellow at the James Merrill House.

We hope you will join us in celebrating Garrett Hongo, a poet whose work reminds us that the human capacity for storytelling, and for listening to the stories of others, is one of the great gifts we share. In his poem “Elegy, Kahuku,” the poet writes, “a story begins, and its end is in whispers.” It is this diminution that we are granted the opportunity to make possible, as this exceptional poet says, a “drifting on from memory to magnificence.”

I watched for a long time and thought what my life would have been like if I really were an orphan, if Ethel had raised me on the Lower East Side. I usually felt like her guest—she was so considerate of me. At times I felt like her husband, coming home after my workday to eat food she’d prepared. I didn’t know why it was hard to feel like her daughter.

“Damn your liver,” I grunt, through Lila’s throat. “Gerald, you were too good to attend my deathbed, I hope your syphilitic nose falls off. Marcus, Monica, did you think I wouldn’t see you fighting over the family silver when I died?”

Death of a Master

I don’t mean the way New York itself hardens you through constant friction with endless streams of people, their pettiness and self-absorption rubbing against your own until you are encased in a shell of indifference and even cruelty. I mean he solidified me. He gave me substance I had lacked.