Now that our staff is back in the swing of things on the Mountain, Adam Ross, Hellen Wainaina, and Spencer Hupp sat down to reflect on their time at the annual Association of Writers and Writing Programs (AWP) conference and share their impressions of Portland.

This was only my second time at  AWP, and once again, meeting our contributors was the best part, in a city that seemed to be showing off for us. I mean Portland, Oregon, of course, during a stretch of perfect days—bright, cool mornings giving on to sunny but never too hot afternoons. Almost entirely cloudless, so that from, say, the Hoxton Hotel’s rooftop (their mescal menu is without peer) you could stare out over the Willamette River, the Burnside bridge, and Portland’s uniquely amalgamated architecture, part-industrial, part-hyper modern, to see Mt. Hood. There should be a German word, I couldn’t help but think, for events (or vacations) blessed by such weather, when it seems as if God or the universe is intent on invoking divine favor, via meteorology, on a visit or a holiday (or a conference). There should be a German word for the sadness one feels to spend such days inside, staring out floodlit windows filled with greening trees—how I felt, confessedly, upon first entering the Portland Convention Center that Thursday. Of course, the dread was quickly dispelled as soon as I arrived at the Sewanee Review’s table and began to make greetings. Not only with the people I’d arranged to meet but those I somehow didn’t realize would be there, so that the serendipity of this massive gathering has the same, unexpected pleasure of wandering through Powell’s Books (more on that in a moment).

Edit a literary magazine and the majority of your first encounters with writers are on the page. It’s a joy, then, to shake the hands with those you’d long admired in the run-up to publication. Like Armen Davoudian, whose poetry we’ll feature in the Summer 2019 issue. Or that pair of wickedly talented Stegner graduates, poets William Brewer and Noah Warren, who have appeared in the Fall 2018 and Spring 2019 issues respectively. To finally meet poet Austen Leah Rosenfeld (and her lovely husband Will), winner of our Walter Sullivan Award, and over coffee and scones discuss everything from Twitter addictions to impending climatological catastrophe to our shrinking attention span, with a smile. Or to get introduced to writers you hope to bring into the magazine soon, like Julie Buntin (or her husband, Gabe Habash), whose novel, Marlena, comes as highly recommended as his debut, Stephen Florida.

Give me a city with light rail. One where Ubers and Lyfts seem to appear so fast it’s as if instead of using an app you simply said abracadabra. Give me Melissa Febos, who I got to sit down with for over an hour, at the basement recording studio of Saint Cecilia’s (thanks for your engineering help, Steven!) and discuss, during our podcast recording—we’ll launch these later this month—the essay of hers we published this spring, "Thesmophoria," along with her two previous memoirs Abandon Me and Whip Smart, and which books she’d pack come the zombie apocalypse, and the poetry she’s memorized. Give me great food. The pork Jaozi dumplings, lamb noodles, and street fries—the latter like deep-fried twigs of fire—at Danwei Canting. The Squid Ink & Oxtail Tortellini at King Tide Fish & Shell. Give me a couple of slices of sausage pizza at Sizzle Pie after a couple of hours wandering through Powell’s, where I bought gifts for staff: Six Memos for the Next Millennium by Italo Calvino for editorial assistant Hellen Wainaina; The Collected Works of Billy the Kid for assistant editor Spencer Hupp. And then, exercising the greatest self-control, only The Selected Ted Hughes, Coming Through Slaughter by Michael Ondaatje, Autumn by Ali Smith, and ten more I won’t list here. Give me AWP in San Antonio next year. 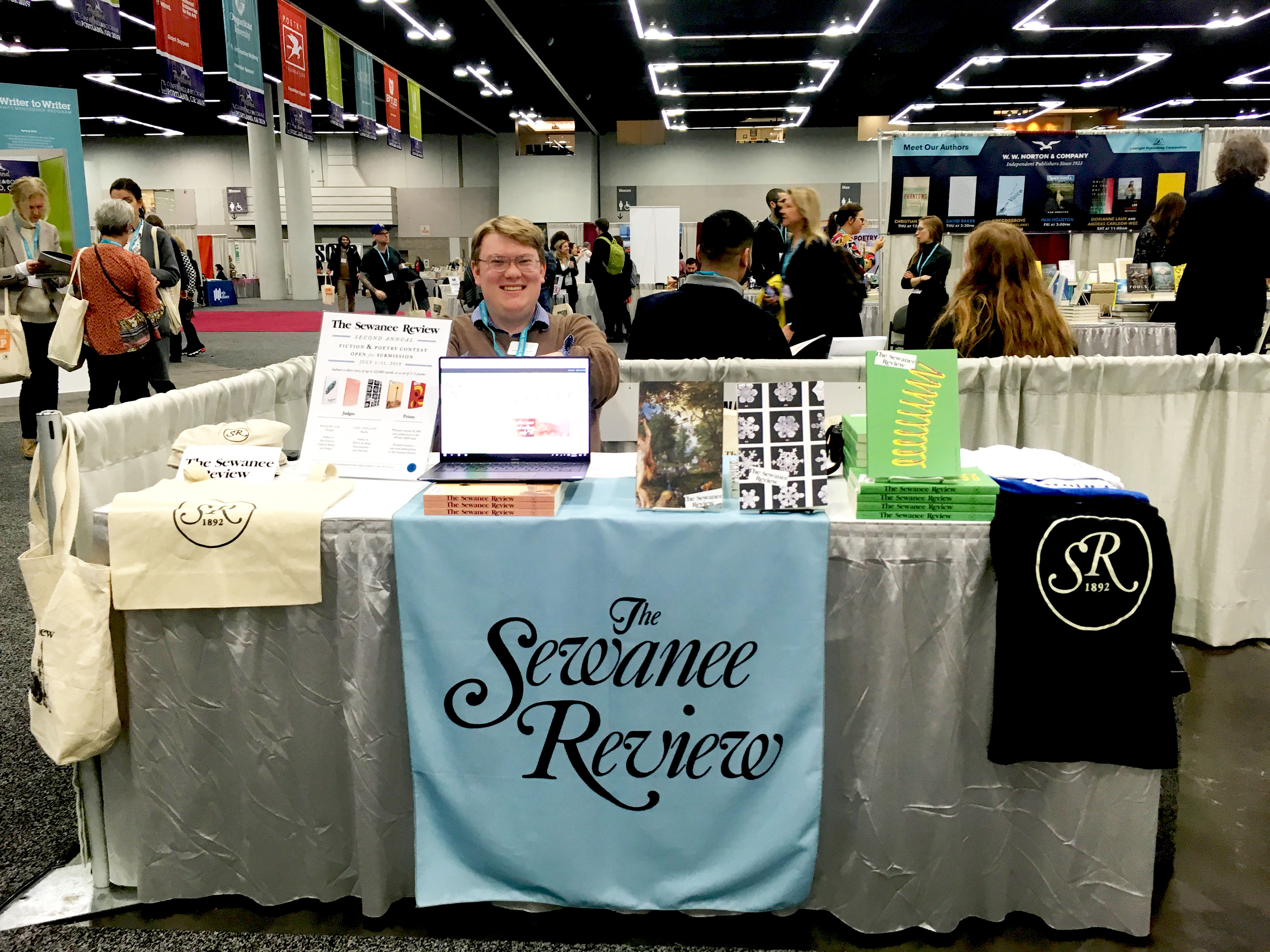 I could not have had a better introduction to AWP—the vast community of writers, educators, and publishers it connects—or to the west coast of the United States than the one I had this last week in Portland. It was hard to sit still a few feet away from some the most keen, funny, and fully-formed authors, poets, essayists writing today. In fact, more than one of the poets speaking at Carl Phillips’ long-overdue tribute testified that Carl sprang into this world (and the into the literary landscape) fully-formed and brilliant like Athena from the head of Zeus. To witness the literary community recognize Carl and rejoice in his work was a joy; the Review recently published poems by Phillips in Spring 2019, but it’s the selected poems in tandem with an impeccable and powerful essay from Garth Greenwell about Phillips’ stupendous body of work coming Winter 2019 you should look out for.

By pure serendipity on my way to hear Tayari Jones read from her novel An American Marriage, I bumped into the brilliant Evie Shockley, whose most recent collection, semiautomatic, I keep reaching for again and again. I walked with the eloquent and charming Melissa Febos to Saint Cecilia Studios to record a podcast (seriously, stay tuned). I spoke with Sarah Gerard about the responsibility of memoirs to record and remember and about Kiese Laymon’s poignant memoir Heavy.

Some of this was planned but most of it was in the moment luck and fortuitous opportunity; I am convinced that the magic of AWP is the persistent and necessary reminder that there are so many of us, and so many others writing and reading; the most unexpected and fun literary conversations—spanning in subject from Homer to Patricia Pollaco’s and Allen Say’s children’s books—I had were with my Uber drivers. I feel exhilarated to have been grounded whilst meeting the stars of contemporary letters. Give me AWP San Antonio, indeed.

This last weekend in Portland changed my life in two small, decisive ways. There’s this bookstore in downtown Portland called Powell’s that has a reputation for scale. I managed to get out of there relatively unscathed with six lightly used books, including one from a poet I’d overlooked far too long: Frederick Seidel. His poetry is some of the best crafted of the last half century. It’s harsh music: barbed, frank, brutal, but never cruel; he attacks our innocence to remind us it’s still there. Harrowing, miserable, beloved, brilliant stuff, this. The book I picked up is called Ooga Booga.

The conference—my first—also gave me cause to see Ilya Kaminsky read from his new collection, Deaf Republic, a work that may well survive civilization itself. It is a book of small graces, of resistance, of inordinate, unconditional humanity that brought me—I’m not ashamed to admit—to tears. Ilya’s reading was rhapsodic, an essay in the musical potential of language. We the meagre public might not deserve Ilya Kaminsky, but he believes in us, and that’s enough to keep me reading of, writing for, and living in this world.

Manning a table at the AWP bookfair for roughly seven hours a day, three days running, taught me quite a bit about the virtues of patience and the nightmares of monotony. But it also confirmed two suspicions that had been gnawing at me for some time. First, that there is a supportive and generous community of writers many thousands strong working toward improving the lives of students, readers, and anyone with an interest, conscious or otherwise, in the future of American social and literary culture, and, second, that the Sewanee Review is doing its part in securing the vitality of that future. This is a community I’m proud of.

The trip also helped mitigate some of my (unfounded) preconceptions about the Pacific Northwest, whose people and places, before last weekend, I’d yet to experience firsthand. Where I did encounter more than my limit of carefully manicured facial hair and craft breweries (which both have their place in the American cultural ecosystem), what I experienced was a city of kind, interested, forthright people, fair weather, and a great deal of good food. Which is about all anyone can ask for.

Many thanks to our contributors for coming to meet us in person at our book fair table and most of all for doing the hard, at times thankless, job of writing. As the nation’s oldest continuously-published literary quarterly, our pages are home to some of the most exciting new voices in American literature because of them, and we are continuously publishing because our subscribers keep reading. From the print issues, the upcoming summer fiction and poetry contest, to our forthcoming podcast, the Sewanee Review is seriously new since 1892. If you missed us at AWP or if your totes and carry-ons were brimming with books, our AWP subscription 10% off discount (Code: AWP19) is valid until April 15.

What's There to Come Back To?

When a woman leaves, you shouldn’t let her come back home. But how was I supposed to ignore her if she stayed out there all night? She knocked, and I said, Who’s there? When she didn’t answer, I told her, Go away. I heard her woolen coat rub against the wooden door as she slid down to a sitting position on the step.

Hear Lies Andrew Baker: An Epitome on Figures of Speech

I was in high school at a time when it was still common for boys to tinker around on old cars. Often, this meant taking a trip to Boynton’s Auto Salvage to search for a leaf spring or a set of spider gears among the junkyard’s vast array of abandoned vehicles.

The waiter flirted with her with his eyes, the way many of the men who served them in the future would. It was as if they knew the rules of this game. The young girl with the older wealthy man. You are allowed to undo her top two buttons while spooning hollandaise onto her fish-warmed plate.