As we navigate this season of change, here are three books that have made our springtime a little greener. 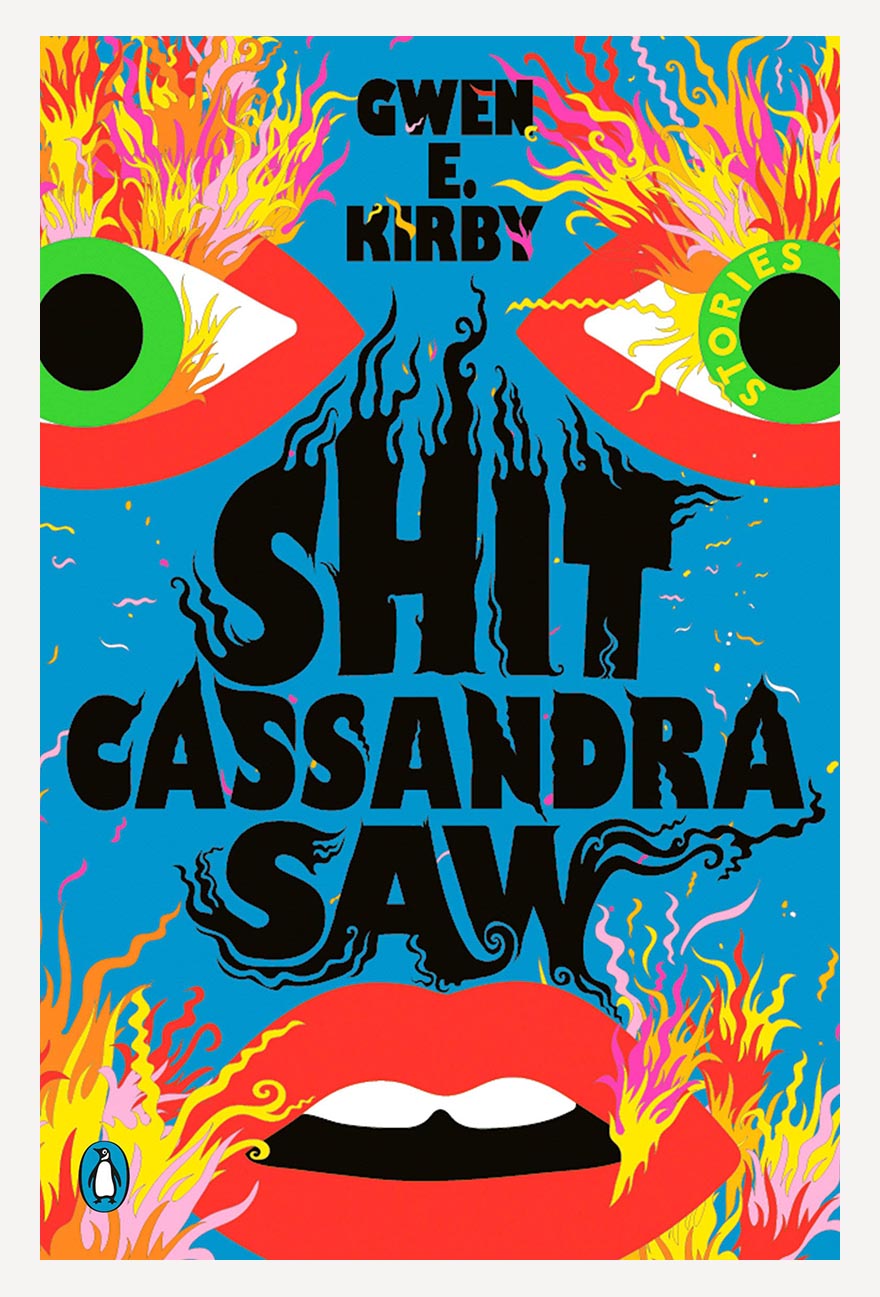 f the great joys of working for the Sewanee Review is the consequential proximity to talented writers. Gwen E. Kirby, a Sewanee professor, Associate Director of Programs and Finance for the Sewanee Writers’ Conference, and author of the story collection Shit Cassandra Saw, is one such writer whose orbit I feel lucky to have crossed. Her debut collection offers twenty-one stories, each wholly strange and immensely charming. Kirby centers the collection on the female experience—these women play softball, work retail, get dumped, complete home improvement projects, travel, fight, have good sex, have shitty sex, use dating apps, navigate marriages and children. They ultimately are (more or less) human.

Kirby’s story “A Few Normal Things That Happen a Lot” is at once devastating and delightful (at her launch reading, a room full of women nodded along, caught somewhere between laughter and solemn silence as Kirby addressed sexual harassment and assault, along with the more subtle ways sexism regularly occurs). Yet Kirby subverts these too-frequent occurrences, imagining a world in which women hold otherworldly powers, including fangs, laser eyes, and radioactive cockroach-induced abilities. Kirby’s ability to fuse joy, humor, and some light body horror is remarkable, and clear from the story’s first sentences:

A woman walks down the street and a man tells her to smile. When she smiles, she reveals a mouthful of fangs. She bites off the man’s hand, cracks the bones and spits them out, and accidentally swallows his wedding ring, which gives her indigestion.

Kirby writes with a compelling balance of tone; as the story progresses, it moves beyond this witty and empowering timbre to a starker, more self-aware conclusion:

The women step outside, put on their fake antennae, and walk home holding hands. A man coming toward them nods respectfully and gives them a wide berth. They smile at each other, not evil smiles, but not nice ones, either. They feel good and safe, but not as good and safe as they imagined they would. They are distracted from the stars and the cool night air by the places on their bodies that burn and pull and pinch, the itching that never stops. They are proud of what they’ve done. But still, sometimes, they wish they could be smooth and whole, some softer version of themselves.

Kirby’s other stories are variations on this theme, introducing strange spaces and characters—a ghost, an abandoned theme park, a witchcraft trial—yet each is complicated by the authenticity of the narratives she places them within. Her writing is daring; Kirby challenges literary tropes, traditional form, even historical accounts, but at the collection’s center is an astounding verisimilitude. The kind of truth present in Kirby’s work is one that can be authored only by those committed to deliberately acknowledging and exploring the nuances of their female characters. As Kirby rewrites the patriarchal canon and the darker parts of womanhood, she is careful to also draw attention to the underlying concern—the ways that women, even in the stories and worlds in which they dominate, must give something up.

The act of writing, for me, is like any other physical exercise: it’s terrible. I sweat, usually, red-faced, nervous as to what my peers might think of my form, my technique. While Elena Ferrante’s craft-memoir hybrid, In the Margins: On the Pleasures of Reading and Writing, doesn’t cosign my neurotic approach to the page, Ferrante does recognize this anxiety—the horrific prospect of putting pen to paper—in conjunction with its potential: “I believe that the sense I have of writing—and all the struggles it involves—has to do with the satisfaction of staying beautifully within the margins and, at the same time, with the impression of loss, of waste, because of that success.” 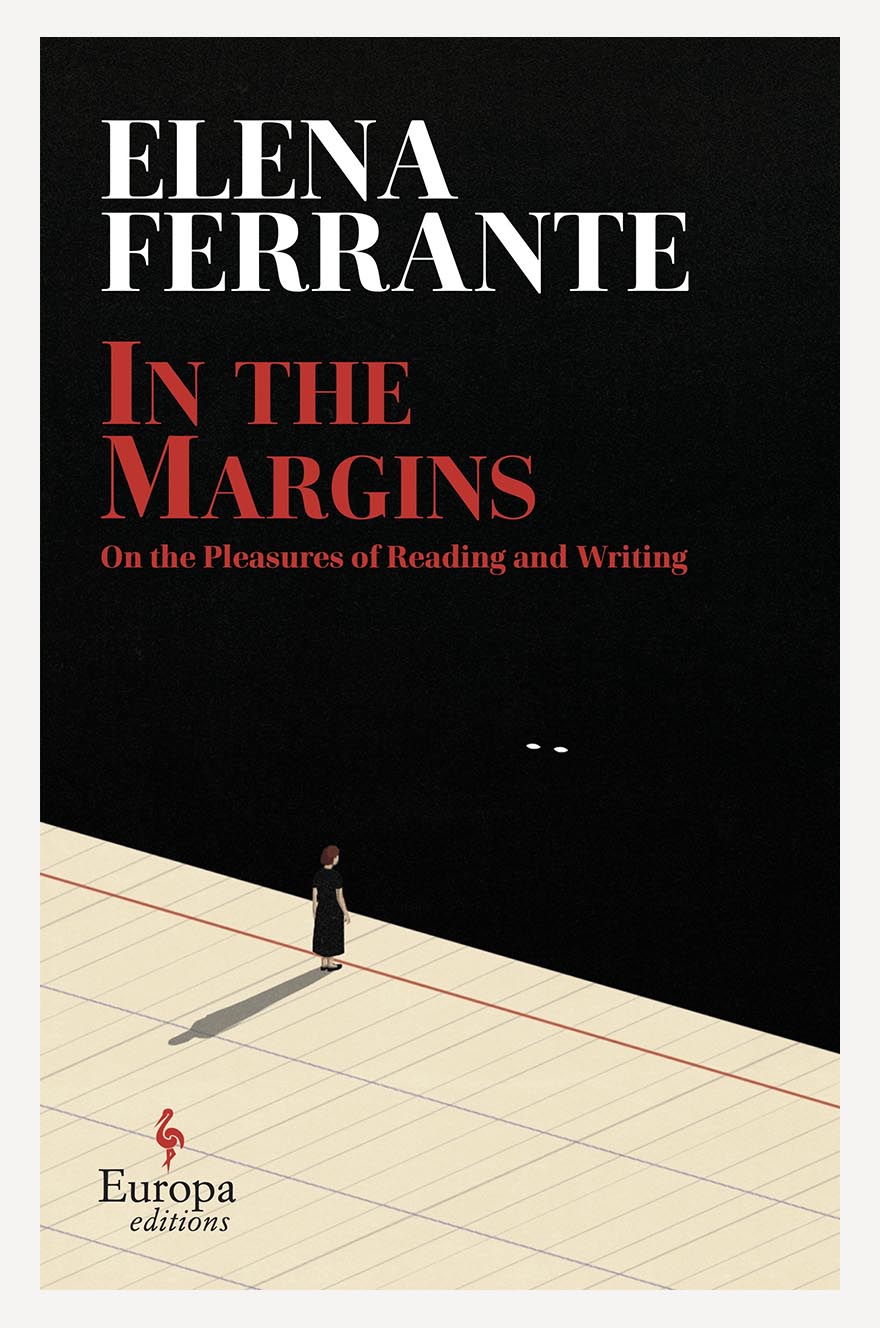 In the Margins is comprised of four lectures. Three of them were to be read at the University of Bologna in 2020; a global pandemic thwarted these plans. The fourth was written for the Dante and Other Classics conference in 2021. In the first, aptly titled “Pain and Pen,” Ferrante combs through various threads of identity (age, class, gender) to better define the relationship between a writer who wants to write, regardless of circumstance, and the literary landscape, dominated by men, that inevitably looms ahead. She reconciles her womanhood and the aching desire to feel like an earnest storyteller, writing, “I was afraid . . . that it was precisely my female nature that kept me from bringing the pen as close as possible to the pain I wanted to express.” She considers this landscape, the “literary patrimony,” so that she might free herself from its grasp: “I couldn’t write like a woman except by violating what I was diligently trying to learn from the male tradition.”

The other voices featured in this book—less secondary sources than they are peers of Ferrante’s, both historical and modern—include Gaspara Stampa, Virginia Woolf, and Gertrude Stein, whose ranging conceptions of selfhood afford Ferrante a field of criticism entirely her own: meditations on Woolf’s “rummages in the bran pie” and Stein’s third-person approach to writing autobiography exemplify Ferrante’s inimitable knack for fast-and-casual theory work. Contemporary literary criticism often comes across as overwrought and self-righteous; Ferrante, on the other hand, employs the work of her forebearers to tell a larger story of oppressive circumstance, of triumph, not for the sake of elevating her own intellect but to illustrate a larger story of what it means—what it once meant—to tell a story.

In the Margins is not a how-to manual for storytelling; it is an empirical and cultural study of the self, considering what it means to reconcile with the violent means and ends of identity:

I’ve never stopped believing in the importance of the writing we’ve inherited, which the “I” who writes, like it or not, is made of. Nor have I ever underestimated the chance occurrence that sets off the hand that writes . . . the road to Damascus isn’t as well marked as the road dedicated to revelation. It’s a road like any other on which, slogging and sweating, we may by chance become aware of another possible way.

Engage directly with truth so that you might learn how to subvert its power, she asserts. Learn to slip comfortably between those searing red margins, find what it means to transcend the page without ever leaving it. Ferrante is firm in her belief that “writing inevitably has to reckon with other writing,” how the sentence arises from the “terrain of the already written.” If true writing is achieved only in a state of simultaneous exertion and reckoning, then Ferrante’s latest illustrates what such an effort might look like.

I find great pleasure in novels that re-instruct me on how to consume narrative fiction—when the breadth of a story is so overwhelming that I have to let it wash over me before I can come close to comprehending it. 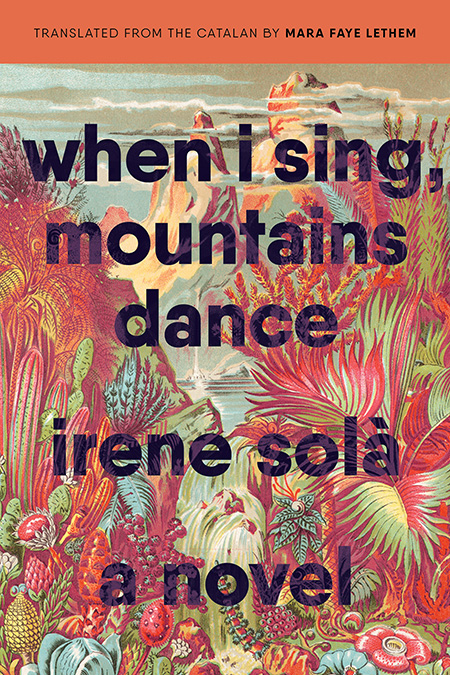 Translated from Catalan by Mara Faye Lethem, Irene Solà’s When I Sing, Mountains Dance entrusts me with precisely this discomforting pleasure. I feel freed from preconceived constraints of prose and style due to the constantly shifting perspective—a new unnamed narrator for each chapter—the atemporal chronology that places the novel ambiguously between the Spanish Civil War and contemporary Spain, and the intangible plot that emerges from both former features as well as the episodic nature of the book as a whole. This controlled maelstrom allows for the sensory features of its language to manifest a forest full of life—people and animal characters alike—while I am allowed to focus on its sounds in my ears and its turns on the back of my palate. Then, as the narrative formations underneath the book’s earthy pages, I am reminded that when I grow accustomed to convention, the mechanisms of a novel can become translucent, following their stories beat by beat, linearly or at least orderly enough that you don’t have to think too terribly hard about where you’re going. But Solà evades that sense of a book on rails. Instead, her novel requires work of me: to see stories as experiences, to piece together a narrative’s trail as I traverse it rather than merely watching it go by.

Solà’s novel, whose delicate idiosyncrasies are audaciously translated by Lethem, takes place along the Pyrenees Mountains, home to a rural community that is temporally torn between interwoven characters. Each chapter is given to a different voice rising up from the mountaintops, fretting the scars left in the forests by bombs and guns and men. However, these voices only betray their identity by how they relate to the forest and to the characters around them—one of many secrets Solà imbeds within the structure of this work. Most often, she gives you a person’s voice. But sometimes she grants you the eyes of a roe deer or the ears of a pet dog instead. My favorite chapter comes from the perspective of the Pyrenees themselves over the course of their sixty-five-thousand-year emergence from the earth, complete with topographical illustrations. That touch of visual, nonlinguistic concordance lifts the entire section, which—almost halfway through the book—creates a sense of the mountains’ grandeur through linguistic brevity foregrounding the passing of millennia: “The movement will have begun again. The disaster. The next beginning. The nth end. And you will all die. Because nothing lasts long. And no one remembers the names of your children.” Once I realized that the few, short sentences next to each illustration represent the mountain’s speech over an incomprehensible time scale for us humans, the mountain’s trembling warnings outsized everything else I’d cobbled together about the novel’s human conflicts.

But then, the novel returns to the most intimate perspective, that of birth. In the chapter that follows, the story of Blanca—surrounded by the support and care of her community of women—is narrated to Blanca’s newborn child herself: “The woman places you on your mother’s swollen belly, between her breasts like two mountains.” Against the simplicity of the mountain’s language, the narrative here carves forward around time and feeling so dexterously, amplifying how that intensely personal moment ripples out like the mountains’ songs. That’s the scale that Solà indulges, a range of magnitude and minimalism that treats every experience, every musical exhalation, every colossal warning with the same scrupulous attention to the environment that shapes us individually and collectively, and an openheartedness for how tragedy and joy ripple out in community.

You can order many of these titles through your local independent bookstore or by shopping through Bookshop.org, which supports local bookstores with every purchase. And we hope you'll consider subscribing to the Sewanee Review or listening to our podcast on your preferred streaming platform.

How (Not) to Translate the Female Body

A woman’s body is largely a cultural invention, given expression through words that mandate what that body must signify, even what parts it must possess. The language we use chisels and molds the female form, like sculpture.

Anyone interested in higher education is aware that it is in trouble. For years public universities (which enroll the large majority of American students) have been systematically deprived of adequate public support, requiring them to rely ever more on students and their parents for the costs of education. The same legislators then criticize them for rising tuition and the burden of student debt.

At Twilight the Signs Shine With a Remote Light

Unless you recall her charm bracelet, you can’t imagine the night sky.