Winter is upon us, and though the seasons have changed, the times have yet to follow suit. Our staff came together to share some reads varied in subject—Nietzsche, the tragic lives of artists, apocalypse narratives, and pandemic poems—but tethered by theme: imaginative escape and the vitality of hope. 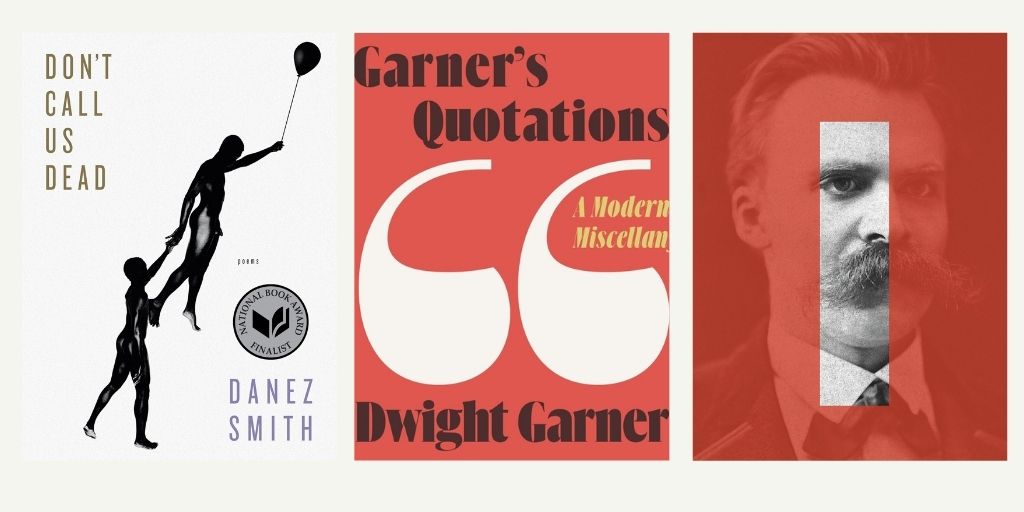 I’m between multiple books right now. Danez Smith’s National Book Award finalist collection Don’t Call Us Dead is wrenching on the subject of race in America, but to my mind, the poet writes just as powerfully on love and sexuality. Here are the closing lines of “last summer of innocence”:

i showed off for girls
but stared at my stupid, boney crew.

i know the word for what i was
but couldn’t think it. i played football

& believed its salvation, its antidote.
when Noella n ’nem didn’t come out

& instead we turned our attention
to our wild legs, narrow arms & pig skin

Also on my nightstand is Dwight Garner’s Garner’s Quotations, which, like a murmuration of starlings, swirls with a pleasurable fluidity around certain subjects (cusswords, critics, race, reading) for entrancing stretches. No bathroom reading these:

A bad review is like one of those worms in the Amazon that swims up your penis. If you read it, you can’t get it out, somehow.

—Peter Cook, responding to the boast, “I’m writing a novel.”

One comes away from its pages with a list of books to read and reread and an even greater appreciation for one of America’s most acerbic, incisive, and humorous critics, attuned, as only the best are, to reading’s keenest pleasures.

Finally, there’s the riveting new biography of Friederich Nietzsche, I Am Dynamite!, by Sue Prideaux, which I’ve been so absorbed by that it has slowed the drafting of my novel (see Peter Cook quote above). Prideaux, who has—along with her biographies on Strindberg and Munch—written a novel, brings tremendous descriptive and narrative prowess to her subject: Who knew hiking a mountain with Wagner while discussing the Ring cycle could be so exciting? The book is a not only a primer on German cultural and political history but a bracing reminder of what a prodigiously gifted writer Nietzsche is on nearly any subject: be it music, psychology, or here, in a letter to his sister when he was in his early twenties, faith:

Every true faith is indeed infallible; it performs what the believing person hopes to find in it, but it does not offer the least support for the establishing of an objective truth.

Here the ways of men divide. If you want to achieve peace of mind and happiness, then have faith; if you want to be a disciple of truth, then search. 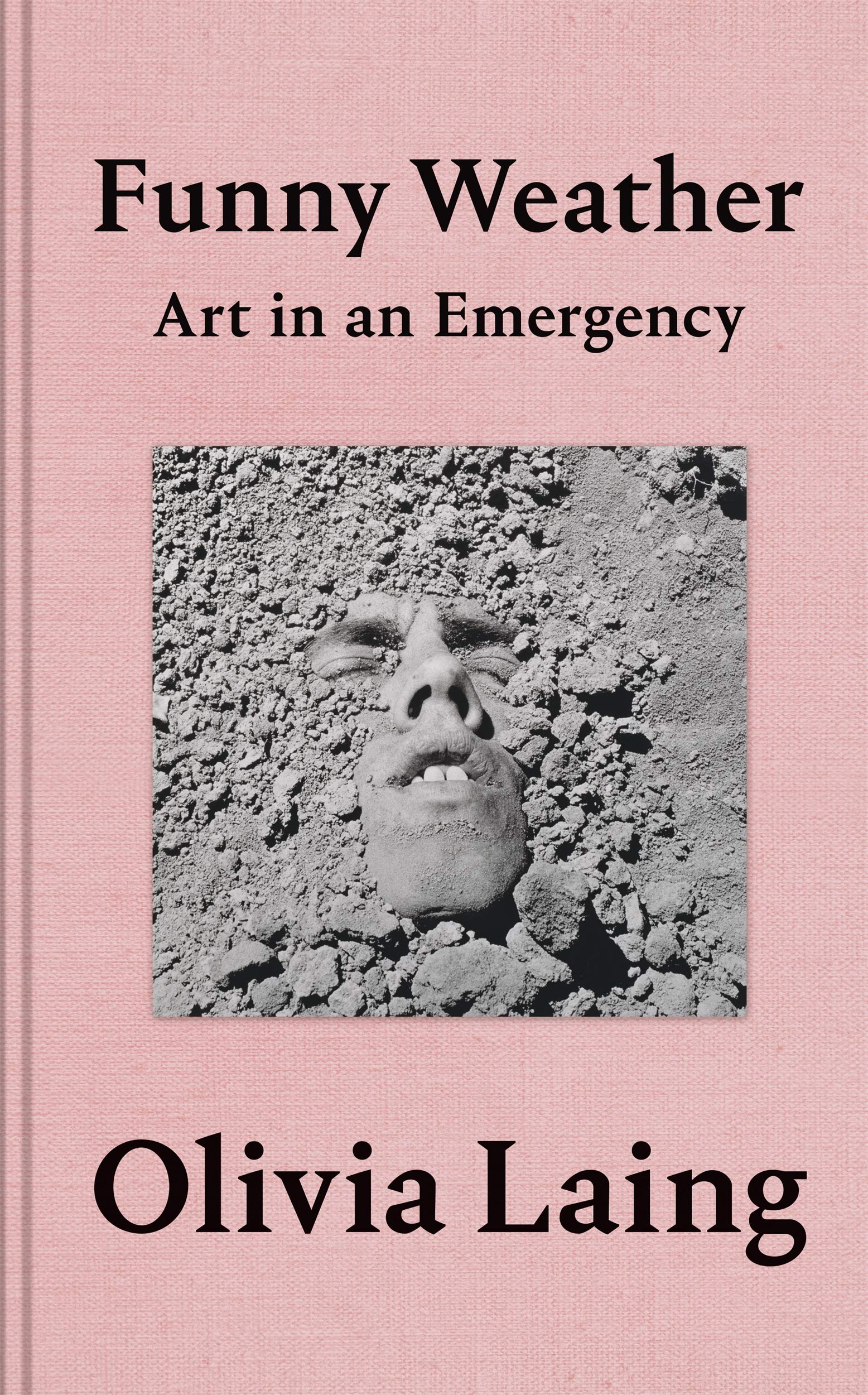 These days, reading has become a slow exercise for me. Between lockdown and working from home, it’s hard to disengage from the world anymore and indulge in even the slightest amount of escapism. And while Olivia Laing’s newest nonfiction collection in no way offers an escape from global issues, it does provide its readers with something more powerful: hope.

Funny Weather: Art in an Emergency doesn’t read like a typical essay collection. Divided into seven sections, it consists of micro-biographies, interviews, essays, book reviews, and “love letters” the author has collected over the years. The most memorable of these sections is “Artist’s Lives,” a series of nine vignettes centered around British and American artists, including Jean-Michel Basquiat, Georgia O’Keeffe, Robert Rauschenberg, Agnes Martin, and others. Although all nine artists come from different backgrounds, they are all connected by their (sometimes) tragic lives: Basquiat dies from a heroin overdose at the age of twenty-seven, Derek Jarman and David Wojnarowicz succumb to AIDS, and many share unhappy childhoods and strained familial relationships.

Laing beautifully dovetails the biographies with her own perspectives on the artists, making the reading experience that much more enchanting. Take the micro-biography of Joseph Cornell, an artist and experimental filmmaker who rarely left his Queens apartment. Laing is not entirely convinced of his famed “gentle nature.” She muses, “His diaries are filled with accounts of the women and especially teenage girls (teeners, he called them, or fées) who caught his eye in the city, entries that are sometimes sentimental or painfully innocent, but are also lecherous and downright creepy.”

But through her particular turn of mind and attention, she brings you back to Cornell’s unconventional way of recognizing beauty in others and in the world, as seen in his short film Nymphlight (1957) where he documents the small, everyday moments of New York City: “It’s hard to think of another artist who might have looked with such loving, serious attention at someone collecting garbage . . . he found beauty in the most unprepossessing of physical forms.”

The effect of Laing’s sentences is such that I couldn’t shake the feeling that I’d stumbled across something private; it is as if she were writing an intimate letter to a friend about how in the face of so much unrest and upheaval, art prevails. One need only read the final passage of the foreword to recognize this:

We’re so often told that art can’t really change anything. But I think it can. It shapes our ethical landscapes; it opens us to the interior lives of others. It is a training ground for possibility. It makes plain inequalities, and it offers other ways of living. Don’t you want it, to be impregnate with all that light? And what will happen if you are? 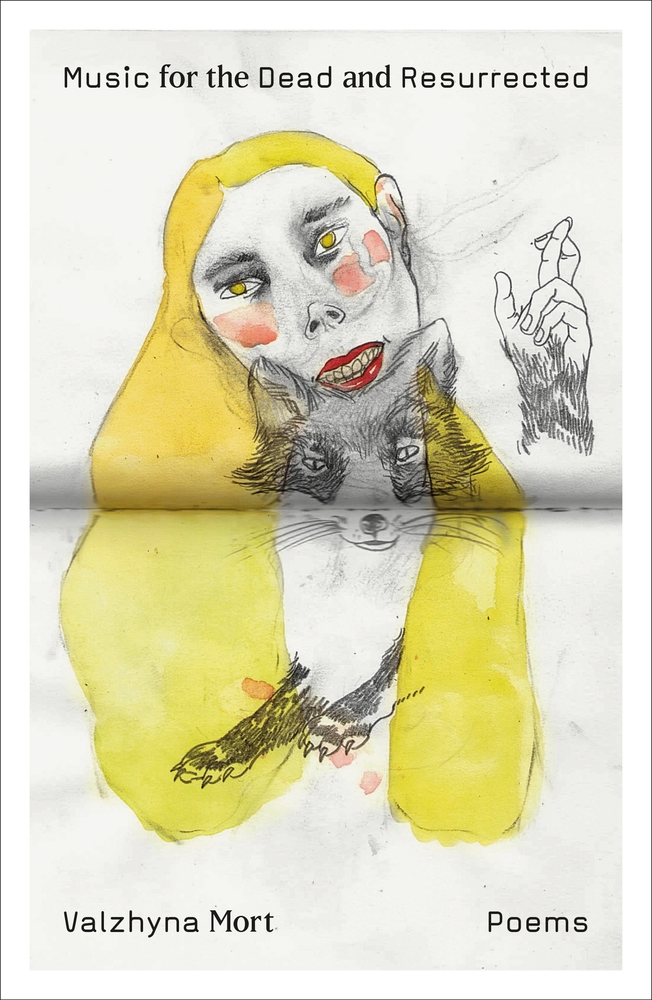 Valzhyna Mort’s poetry collection Music for the Dead and Resurrected is a comprehensive and chilly introduction to Belarus—a part of Eastern Europe I knew hardly anything about, though now my Google history is saturated with the search results for Vaclav’s letters, Marya Ambramovic, Vishnyowka, and valenky, among other words I’d rather spell than pronounce.

The collection’s twenty-three poems translate the long history and troubled present of Mort’s homeland. The poems rely on memory, or “the grave of memory” as she refers to it in her “Psalm 18,” which reads, in parts, like an elegy to Belarus, to demonstrate nostalgia and displacement: “Under the moth-eaten snow / my motherland has good bones.” But Mort refutes the expected wistfulness of elegy in the way her poems speak so urgently, while also exhibiting a peacefulness threatened and a naturalness made dark in lines like, “—wet laundry claps in the wind like gunfire” and “Like a manly tear, a bird glides across the air.” Her lines are gasping and anguished, but tempered with an inquisitive, tender pragmatism that steadies the tone of Music.

Mort’s poems remind me of another recent collection I admire: Eavan Boland’s posthumously released The Historians. Boland also uses memory to explore how we remember our history and our national identity, how we might then redress what has been willfully ignored or extracted—an inquiry that both poets pursue as necessary so that we arrive at a version of what we might call a national narrative that is finally inclusive and unfiltered. 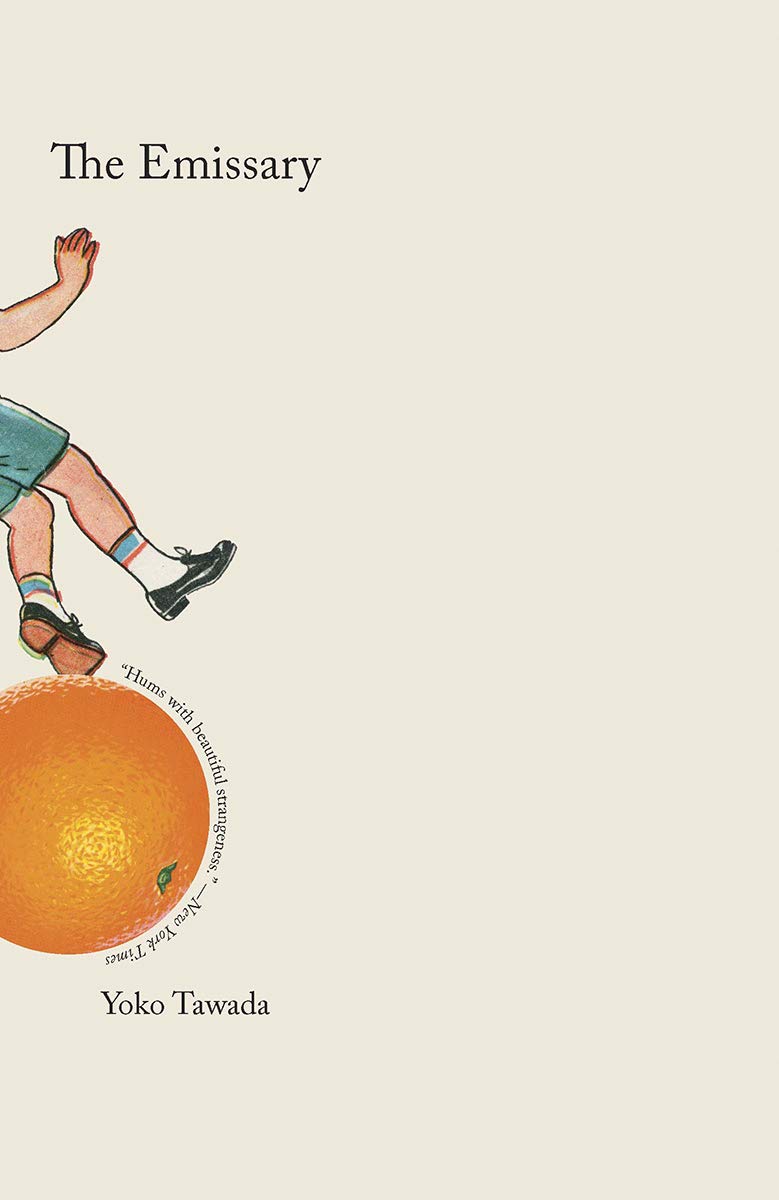 The novel, dear reader, is not the exclusive property of the West: I came away from The Emissary by Yoko Tawada (translated by Margaret Mitsutani) befuddled and delighted by how it captivated without plot. In broad strokes, the novel captures—with humor and tenderness—the protagonist Yoshiro’s day-to-day life raising and caring for his great-grandson, Mumei, in isolationist Japan following an unnamed (nuclear?) disaster.

In Tawada’s world, there is no linear progress; even the physical world is quite literally disintegrating. So far beyond repair is the natural world that its adaptations revolt, undoing eons of evolutionary development. The old are strong, and the young are frail—“you could tell the younger relations by their rounded backs, thinning hair, pale faces. . . . It wasn’t clear whether or not Yoshiro’s generation would really have to live forever, for the time being they had definitely been robbed of death.” This unraveling disruption of prehistoric arcs (cradle to coffin) extends to the most natural progression—the certainty of night following day: “Streetlights and lights in the houses would all be out, as if urging the night to act like night already, but be all that as it may, why was the dawn breaking in what certainly looked like the dead of night?”

Without sunrise and sunset, there is no noonday, no in-between. The book just is and expands in its moment—permanently aware of its history and uncertain of its future. It captures the present moment, which is brief in the continuity of time but eternal in its recurrence. In this interminable wait for relief, for a vaccine, for unrestrained contact with family, The Emissary made me laugh, and its account of familial caring with its apocalyptic whimsy soothed. Shall not this, too, pass? 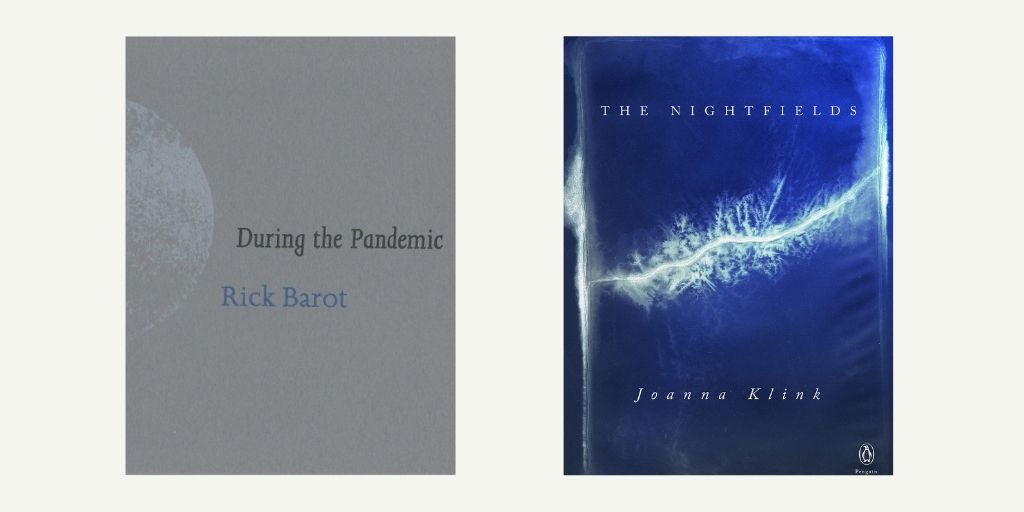 In the absence of larger order and clarity, I’ve turned and returned to Rick Barot’s chapbook During the Pandemic and the “Night Sky” sequence in Joanna Klink’s The Nightfields. I’ve taken to thinking of these projects as poetic advent calendars, as each (in thirty and thirty-one sections, respectively) has offered me an anchoring sweetness as days blur into months that feel hopelessly unmoored. These lines from the ninth day of Klink’s poem (in which I can’t help but also hear echoes of “Sorting,” one of my favorite poems from her book Raptus) have stayed with me:

Similar equipment for living can be found in Barot’s chapbook (which you can read in full on Instagram at @duringthepandemic, but a project like this one, assembled so thoughtfully by Brian Teare at Albion Press, is worth holding in your hands). Here’s the final section:

During the pandemic, I had days when I felt I was by myself on a shore drained of the tide, dragging a stick across miles of wet sand. There were also days when I was a boy again, sliding down a snowy hill on a flattened cardboard box. And there were days when I remembered the teacher who made us memorize a poem each week, and when we asked why, she said we might one day find ourselves in a wreck at the side of the road and we would recite these poems to stay alive.

You can order many of these titles through your local independent bookstore or by shopping through Bookshop.org, which supports local bookstores with every purchase. We also highly recommend the Review’s latest issue, Fall 2020, whose pieces recalled to us, as Adam Ross writes in his editor’s note, “longing, beauty, and wonder,” all of which are still with us in the background of this protracted pandemic. Stay safe. And from all of us, Happy Thanksgiving.

We (Cass’s former students, friends, past and present neighbors, and respected adversaries) had been invited to gather in Connecticut for the seventy-seventh birthday of Casswell Duncan Damaris by his wife, Charlene Andresson. (It’s important that a woman retain her maiden name, even if the concept of “the maiden” has been tainted by simple-minded people who’ve invented nonsense about the symbolism of unicorns and the plights of dashing knights).

In his essay “The Curses,” published in two parts in SR’s Winter and Spring 2017 issues, John Jeremiah Sullivan uncovered the history of what may be, by at least one definition, the first blues song ever written, an 1887 sheet-music hit titled “The Curse.” The song’s composer, Paul Dresser, has long been considered one of the nineteenth century’s greatest songwriters.

Death of a Master

I don’t mean the way New York itself hardens you through constant friction with endless streams of people, their pettiness and self-absorption rubbing against your own until you are encased in a shell of indifference and even cruelty. I mean he solidified me. He gave me substance I had lacked.