The Fall 2017 issue of the Sewanee Review, due out in October, is the magazine’s five-hundredth, and marks the close of its 125th volume. The Review has had the privilege of publishing countless great writers since it was founded by William Peterfield Trent in 1892, but, as former editor George Core remarked, “Longevity alone does not guarantee a virtue.” With that in mind, in 2017 the Review underwent significant changes. Our magazine’s redesign goes hand in hand with a determination to bring a wider range of voices to its pages, and our website, launched earlier this year, now delivers content to the broadest possible audience. In this fashion, we repeat the best practices of our former editors, who, in seeking after “the new literature,” ensured that the Review would be a national magazine that only happened to be located in the South. In celebration of the anniversary, the issue contains images from our archives that touch on the Review’s history; however, the majority of its pages attest to the conviction that the best way to protect this legacy is to look to the future. 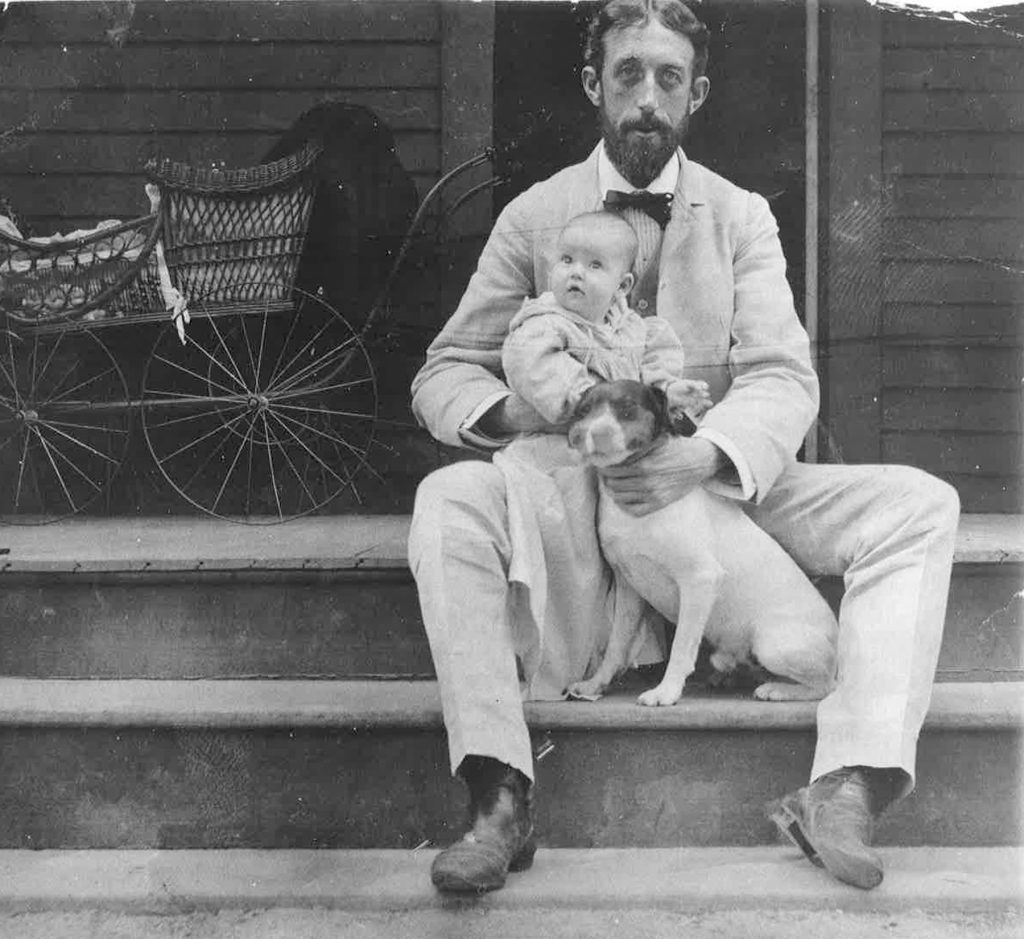 William Peterfield Trent, founding editor of the Sewanee Review. “I got out the first number by hook or crook,” Trent said, “writing two articles and several reviews.” 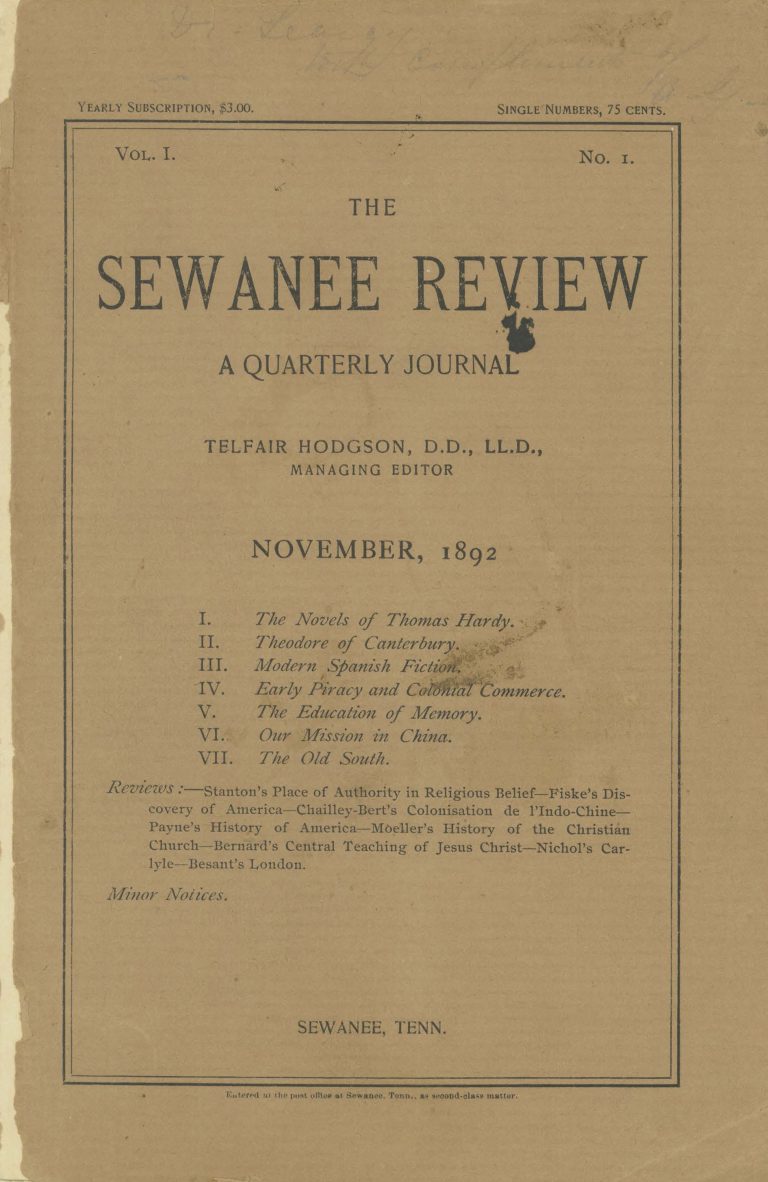 The first issue of the Sewanee Review, “devoted to such topics as General Theology, Philosophy, History, and Literature.” 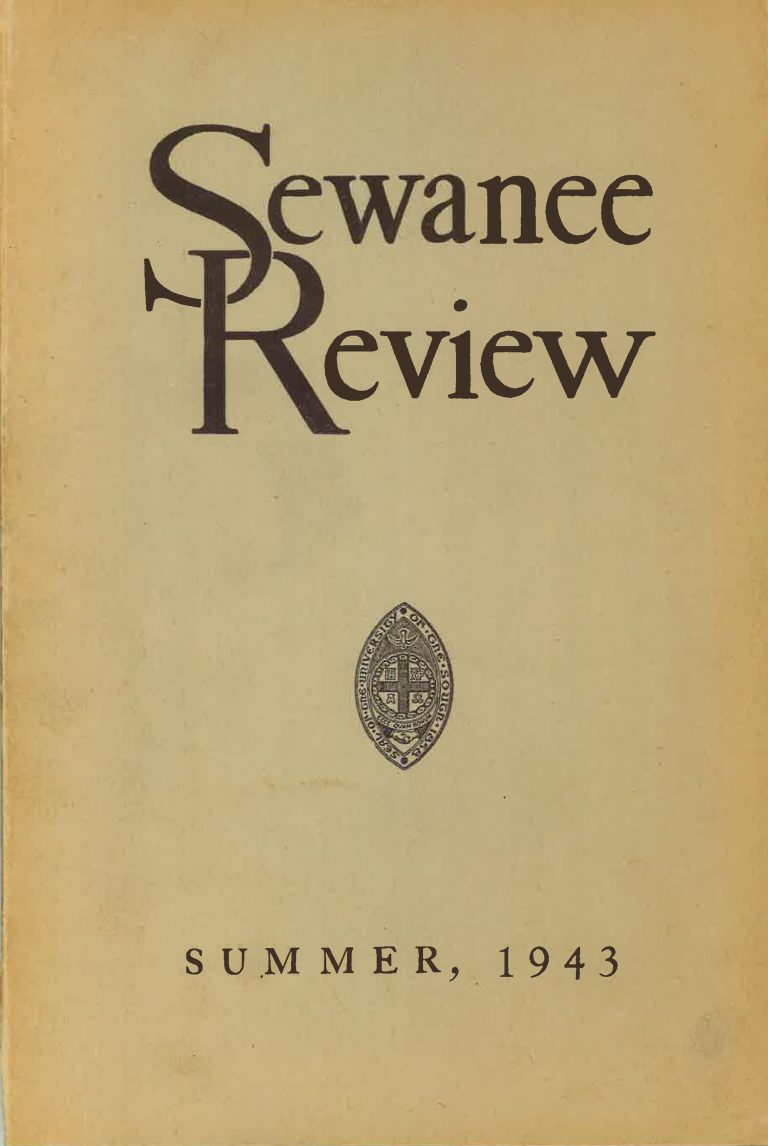 The magazine as it appeared under the editorship of Tudor Seymour Long. 1943 marked the first publication of fiction. 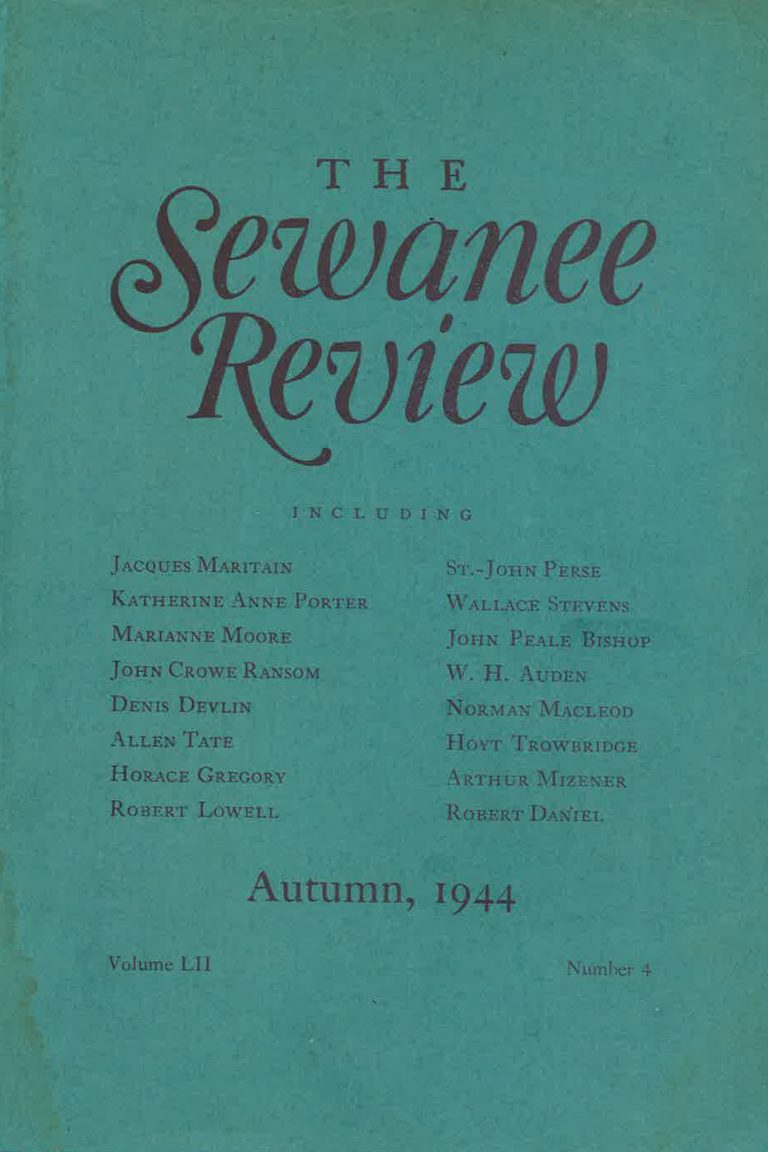 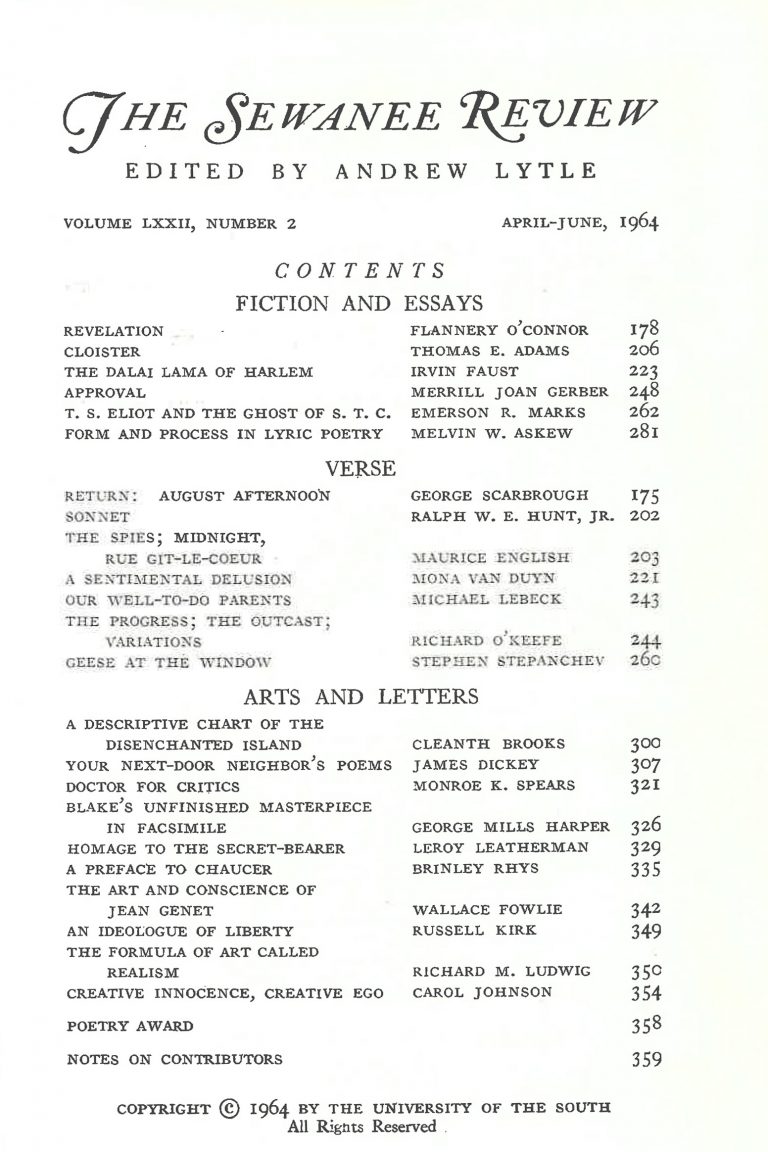 An exemplary table of contents from Andrew Lytle’s tenure as editor (1961-1973). 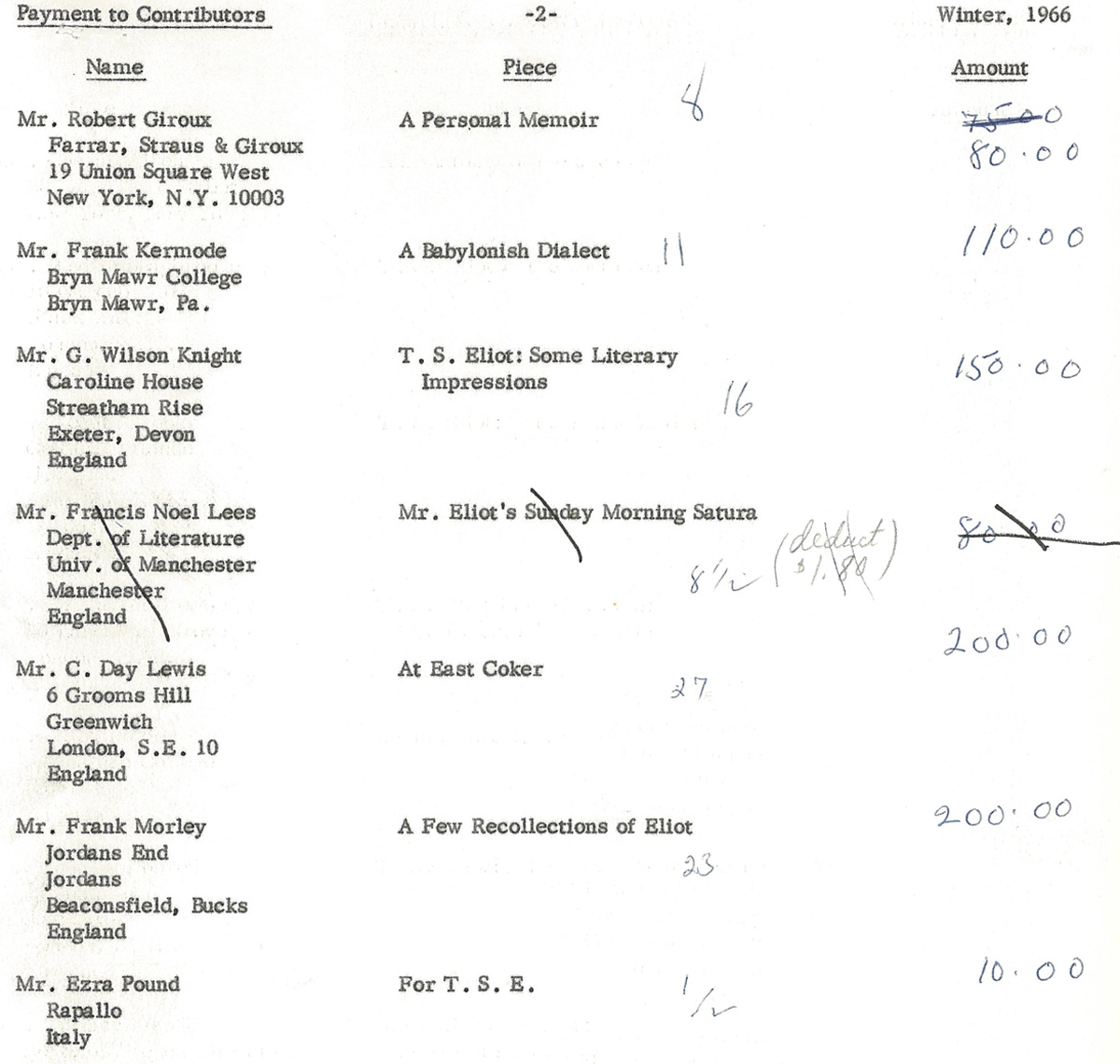 A partial list of contributors to the Winter 1966 issue, guest-edited by Allen Tate and devoted to T. S. Eliot. At three hundred eighty-seven pages, it is the longest single issue in the Review’s history. 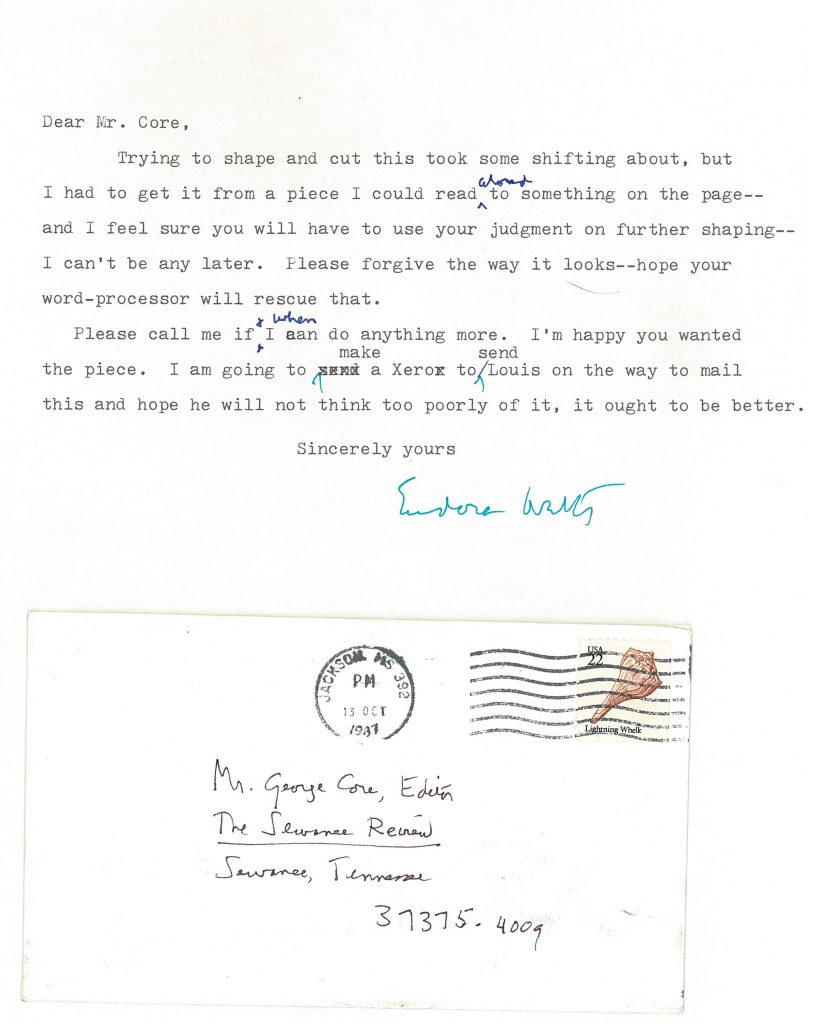 A letter from Eudora Welty to editor George Core discussing the challenges of editing a lecture for print publication. Welty published fiction and essays in the Review for over forty years. 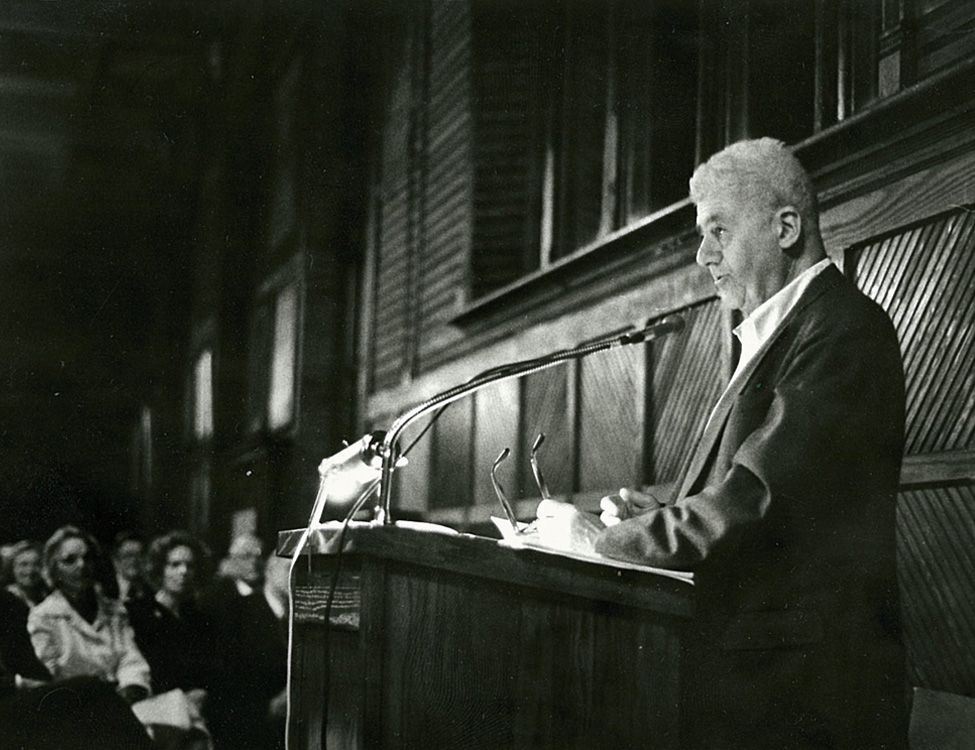 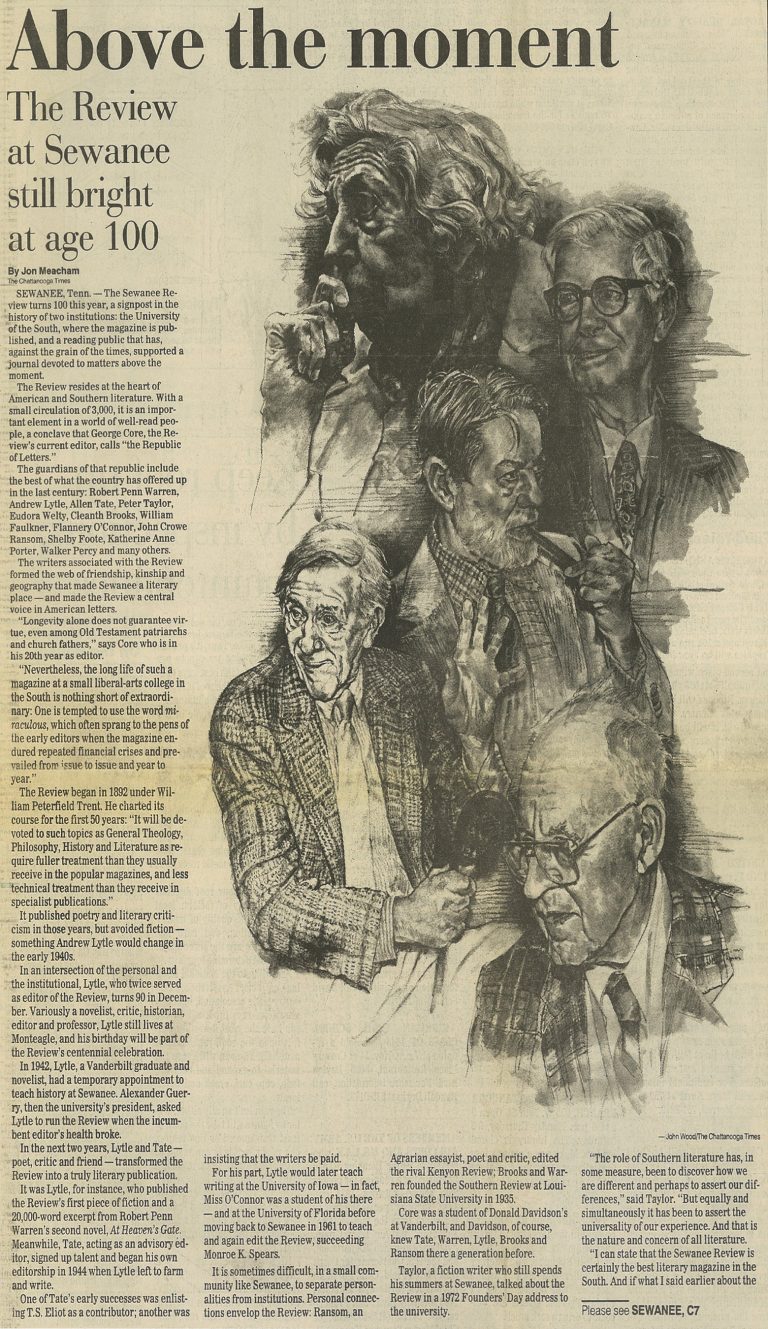 A 1992 article in the Chattanooga Times looked back on the Review’s first hundred years. Jon Meacham, the article’s author and then a recent Sewanee graduate, has since won a Pulitzer Prize. He made his first contribution to the Review in Winter 2017. 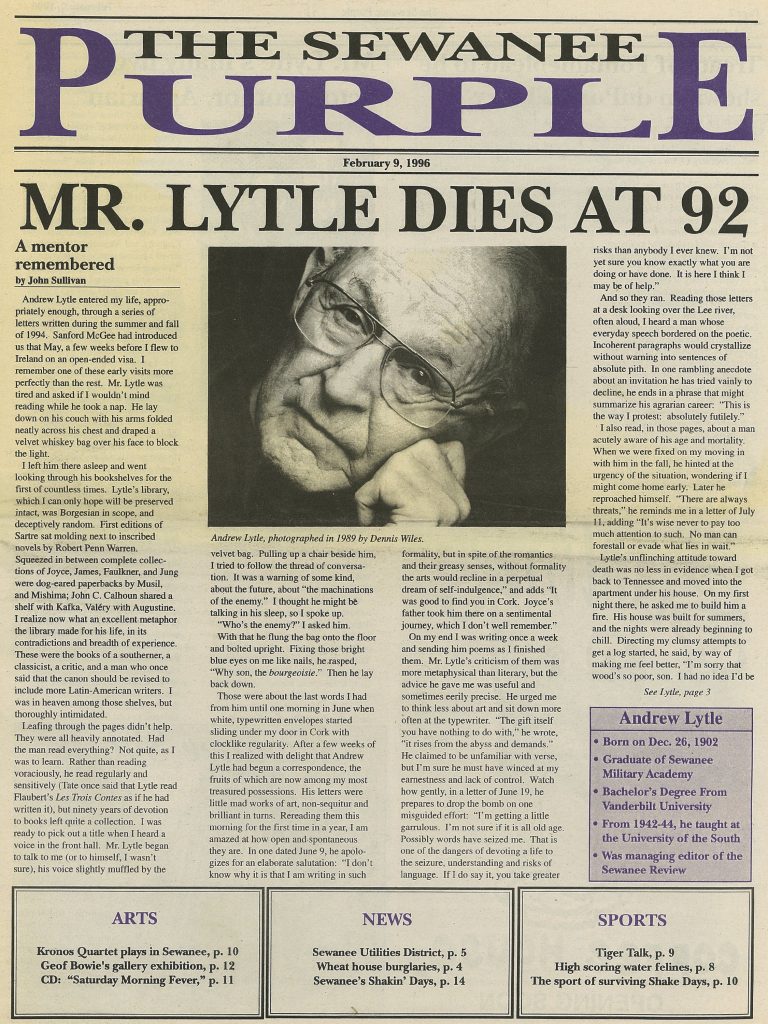 Editor and teacher Andrew Lytle was a revered figure in Sewanee at the time of his death in 1995. John Jeremiah Sullivan, then a student, now a prize-winning essayist, reflected on his friendship with Lytle in the student newspaper.

“I thought to myself, ‘God, I’m glad I’m here. I’m so glad that I’m here.’ And it still didn’t occur to me that anybody was doing anything wrong. . . . And the illumination rounds being fired against the sunset, I thought was the most beautiful thing I’d ever seen.”

Mine was a child’s fall,
the hurt a mother or father can more or less fix
with Band-Aids, a kiss. Almost to the top
of the steep concrete steps to the gym,
my toe jammed. Caught my weight on stiff arms.
(Decent reflexes for sixty-three.)

"Have You Ever Been In Love?"

“I mean, define . . . so there are different phases,
right? That first rush—‘limerence,’ I guess
some research calls it—I’ve—there have been cases—
that’s such a primal, brain-stem craziness . . .