For our Marginalia web feature, we ask writers to introduce us to their favorite works of literature by way of a short piece of prose. This week, Anna Caritj, author of  “White Angora” from our Summer 2019 issue, examines a passage from Milkman by Anna Burns. 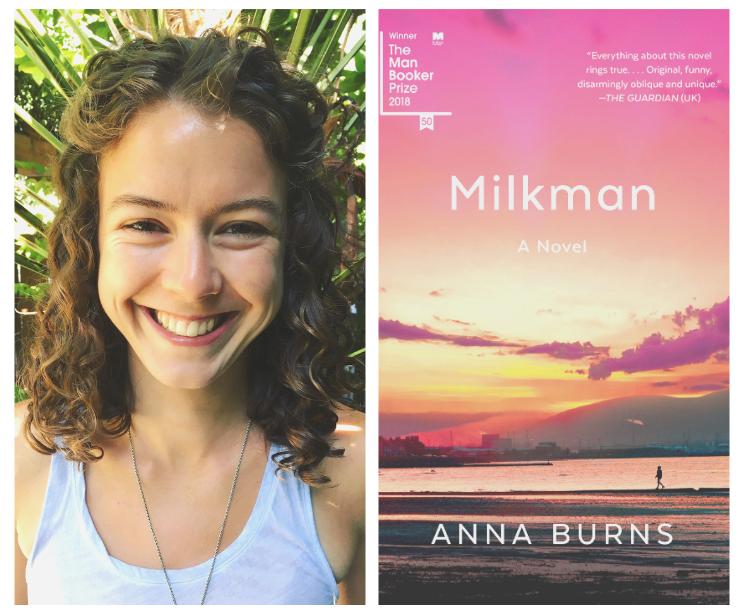 Anna Burns’s Milkman is outwardly a novel about the Troubles in Northern Ireland. But this scene, in which the unnamed heroine stumbles across a cat’s head in the rubble of a bombed-out building, unites the political with the deeply personal. Here, we see an eighteen-year-old girl caught up in the building pressure of an ethno-nationalist conflict—a war—threatening to erupt at any moment. On impulse, she picks the head up:

Here I was, standing beside this milkman, my thoughts easily to become terrified, not helped either by the dead cat’s head I was holding in my hands. All through our exchange I made no reference to this head, nor did I look at it. He too, appeared not to look at it. I knew though, that he was well aware of what it was. Probably had gotten the detail of my picking it up, of walking back, walking forth, all that dithering about beforehand. I was sure too, he’d have clocked my rolling it in the hankies, lifting it, perhaps also mind-reading my intention to carry it up to the usual place. Just as I was saying nothing about it though, he also was saying nothing, as if it were inconsequential to be standing where nobody ever stood at a quarter to ten of a summer’s night beside a teenage girl holding a decapitated head, while chatting to her about taking the life of the boyfriend she was maybe-involved with. No wonder then, given the effect his appearance and words were having upon me, that for a tiny space of time I had forgotten the head was there.

The discovery of the cat’s head allows her to think about the violence that seethes below the day-to-day lives of many Irish women and girls. With their feminine presence, cats draw the anger of frustrated Irish-Catholic men. “Men and boys killed the cats, or at least in default of killing them, kicked them or catapulted them with stones on passing. It was one of those things that happened,” the narrator explains in the fifty-page series of ruminations that surrounds the discovery. Sexist violence is often obscured by more overt political tensions—Catholic against Protestant, Irish against English. “So you didn’t mention the occasions when you happened to come across a dead cat.”

The narrator’s “maybe-boyfriend” might protest that a cat is just a cat, but in Burns’s book, the animal doesn’t just represent femininity. As the narrator folds the head in her handkerchief, it becomes a symbol for the hidden dread toted around by the colonized Irish. It reminds us of the innocents caught in the crossfire between British soldiers and IRA militants. And it becomes an outlet for the tenderness that the narrator can’t elsewhere express without drawing ridicule and suspicion.

The cat’s severed head is a stand-in for all the things that are wrong with the narrator’s world, things that ought to be talked about, but are overlooked or ignored or buried.

Even as it carries a hefty symbolic role, the head also lends the scene a deep sense of tension. The narrator clutches it to herself, trying to keep it hidden as she converses with the milkman, the man who stalks her (but who the community gossips call her lover). Like the narrator, we almost forget that it’s there, until its sharp tooth nicks her finger.

Anna Caritj is the author of Leda and the Swan (Riverhead 2021). She holds a BA from the University of Virginia, where she studied English and Spanish literature, and an MFA from Hollins University. She lives in Virginia.

We are, in short, lucky as hell. And so, we’re grateful and believe the least we can do is submit ourselves to driving one another a little crazy.

My grandmother asks me to translate COVID-19 updates as well. Some of her questions are similar. Who? When? How many? And where? “New York,” I say. “Seattle, San Francisco, Sacramento, here.” I try not to lie. I try to keep her wary.

In Marble and Light

Then, one by one, like mourners at a funeral, each of them shuffled up and shook my hand, some saying nothing but looking deep into my eyes, theirs glistening in the autumn light.